It has been now more than 1.5 years this build took from the arrival of the frame and the first spin. The first month went quite fast. I identified the year, tried some parts build it quick if the frame fits and then, pause....Only this September I saw the frame in the "shed", thinking, its time - here the process.

A foreigner in the US Steel Fights Back group - Chas Roberts. A fantastic frame builder from UK.

This frame came to me from a German collector, who found it on eBay UK. Unfortunately there was no more info until that point.

The Roberts Custom in Hamburg 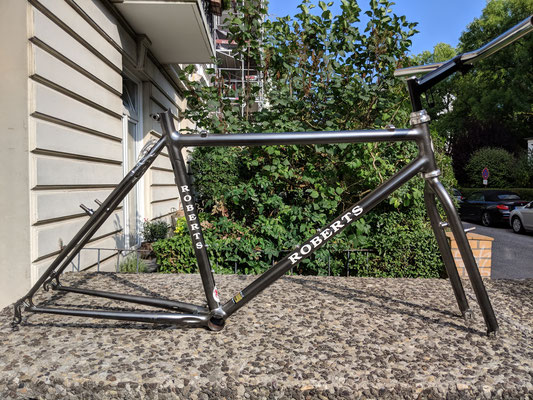 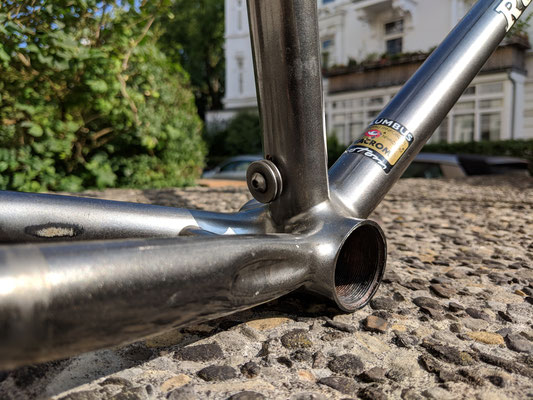 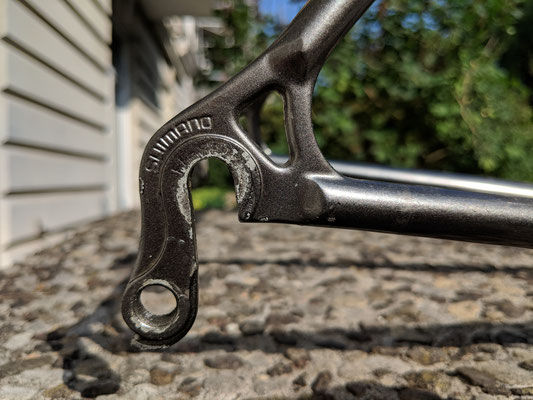 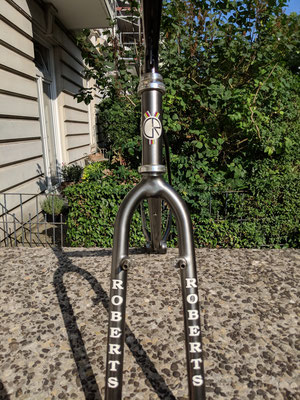 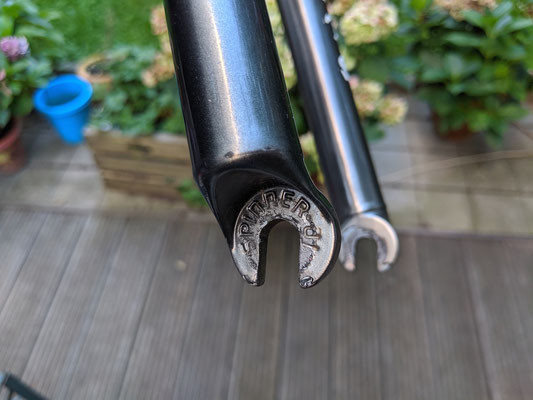 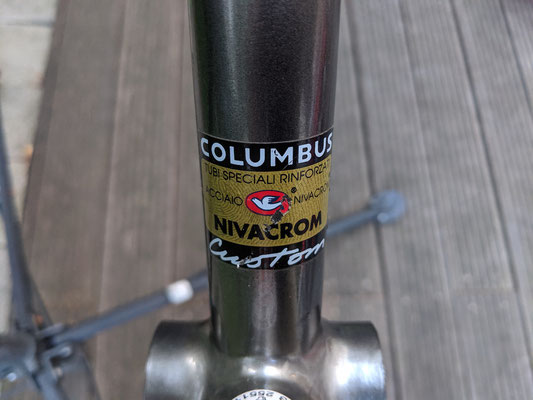 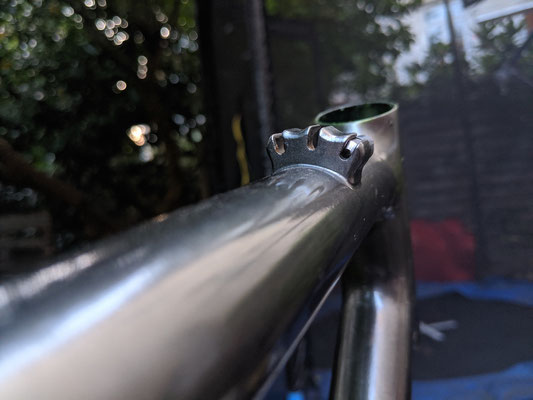 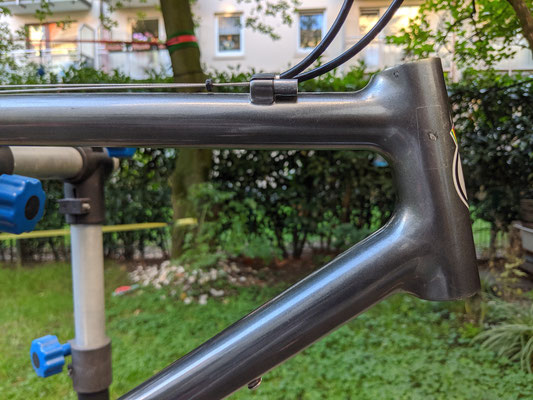 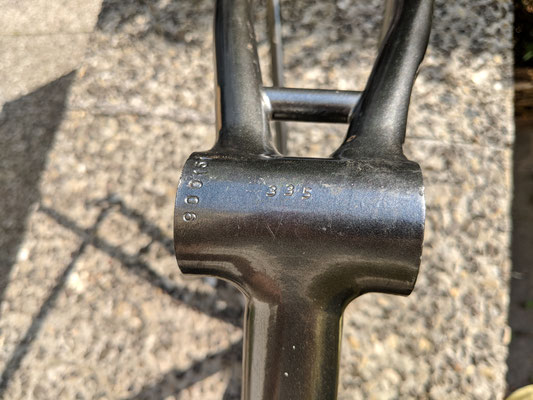 After some searches on know platforms,  I found this picture on Chas Roberts nice flickr Page (link) and the opptortunity to contact Chas Roberts, which at least confirmed some important things. It is a Roberts Custom from 1990, build in January and it is number 51 - always nice when the serial numbers are structured.

I found your mail address on the http://www.robertscycles.com/ and I´m hoping you can help me with some more details and identification on the beautiful Roberts frame set I recently bought.
The seller didn’t know much about it, only that is was sold on eBay Uk a few years ago.
First I assumed it is a white Spyder, but the missing cable routing in the back confuses me a bit.
The serial number is:
900151
335
The measures are
Top tube: 22.5“ (center-center)
Seat tube: 19.5“ (center top), 17.5“ center-tob tube
Steer: 5.5"
Is it custom frame made model? Do you know the shop: „Renovation - Bob Jackson - Leeds“ what is written on the decal at the bottom of the seat tube.
The only other information I found was this bike with V-Brakes, but I hardly can image this frame a young timer. This is taken from flickr
Thank you very much for your help.
Best regards from Germany,
Matthias

Thanks for your email.

Unfortunately, due to the way that records were kept at Roberts Cycles, we don't have access to the frame number log; we can only find details about a frame if we have the name of the person who commissioned the frame from us. If you know this, we can search the files. Without the name, we're sadly unable to help.

With the number you have, it indicates it was built in January 1990 and would have been the 51st frame to leave the workshop that month. Almost all Roberts frames were custom, particularly the MTBs - for a short while, Chas produced a series of road frames with standard sizing, and the company produced runs of similar frames for other brands for a time. Sorry not to have been more help.

another indicator, the decal

Bob Jackson are frame painters primarily,  so the frame likely has been respected by them at some point with new decals, and their sticker is to show they have done the refinish. They are highly regarded, and a lot of people in the U.K. use them for top quality finish. They're an old firm, but lead times can be looooooong as they're quite slow!

Couldn't he was the standard painter from Chas?

It is very likely that this paint is not from back in the days. Chas Roberts was based down the south of England, Bob Jackson was up in the north at Leeds.

Too far apart for painting from the frame builders, it would originally have been done locally to Chas. Also, I was told the sticker is a later one Jackson.

This whole information came from a very nice and good guy I know, Thank you Thomas.

As mentioned above, when I got the frame, I immediately wanted to see how it rides, so this was the version 1 - sadly clear from the first km, I want to build it different and take some more time for it.

The "R" aka Europe build

Most Roberts saw were equipped with Campagnolo, but this should not be the plan.. a) I´m not the biggest Campy fan in terms of performance and b) the custom frame should become a special build with selected parts coming from UK - there are famous brands like Middleburn, but also smaller like Royce UK, which are so damn pretty parts.... here some I foundfrom UKand Beyonce/EU 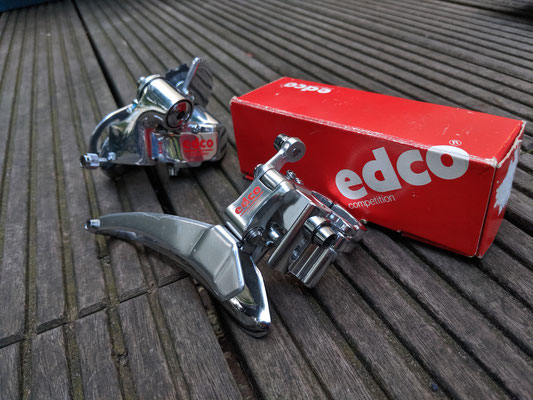 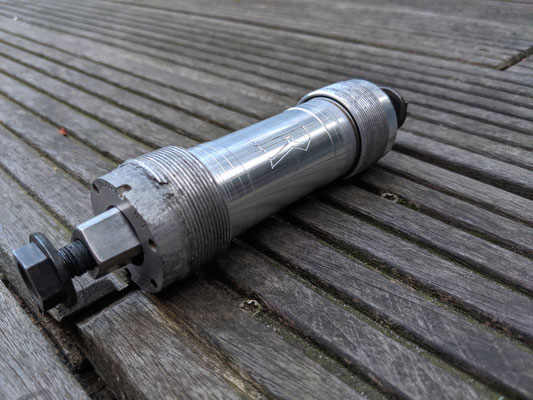 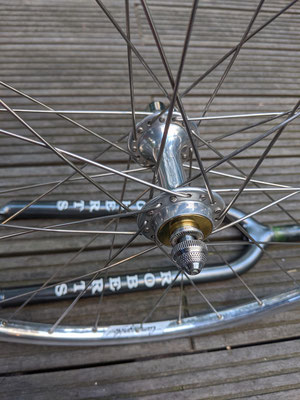 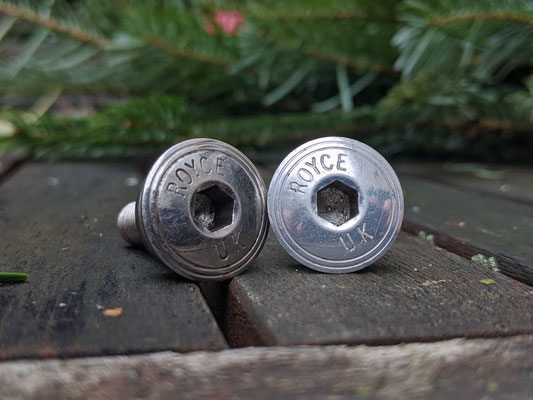 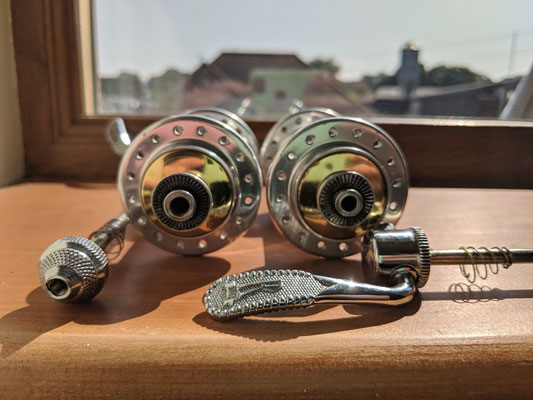 The R addition from Marin county

Next to these EU parts, I couldn`t stop thinking if I should add another big "R" to the Roberts, Royce and Rhino. Tom Ritchey parts nearly fit to all fillet brazed builds from the early 90ies, logially also to Chas' frame. 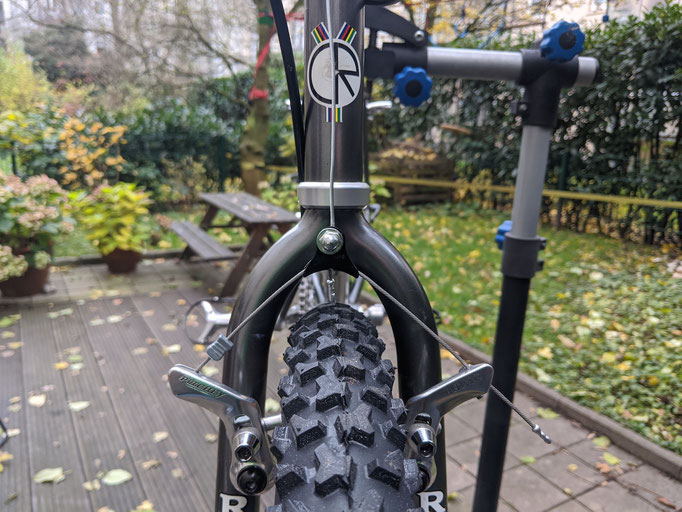 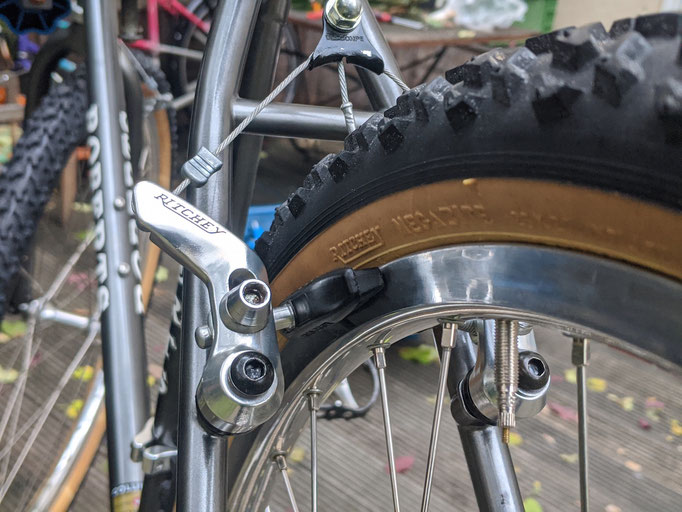 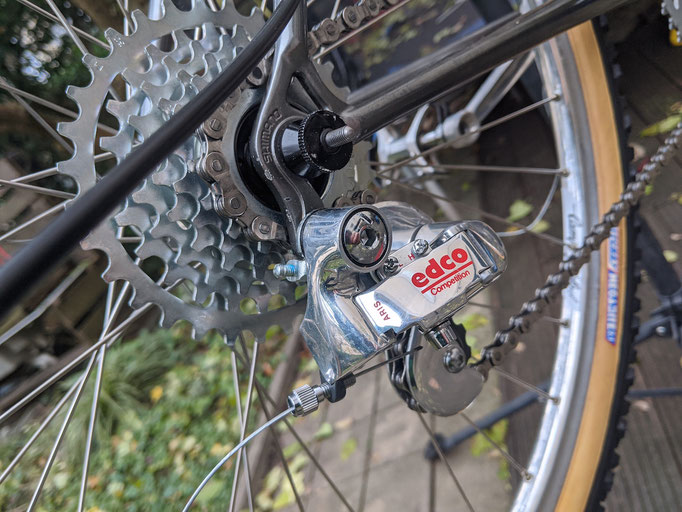 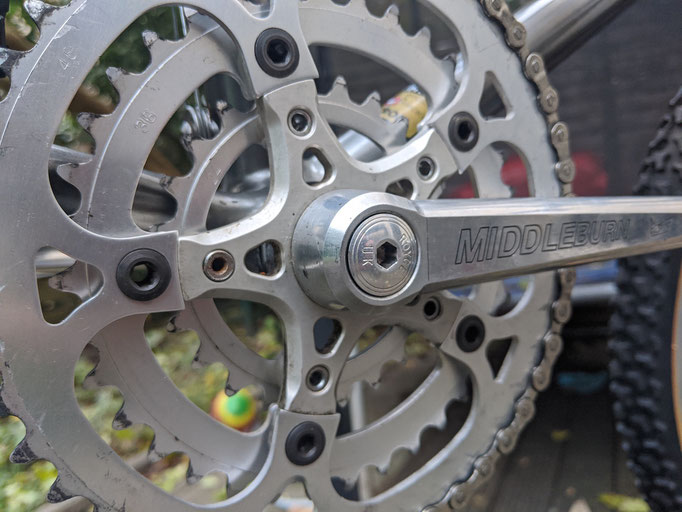 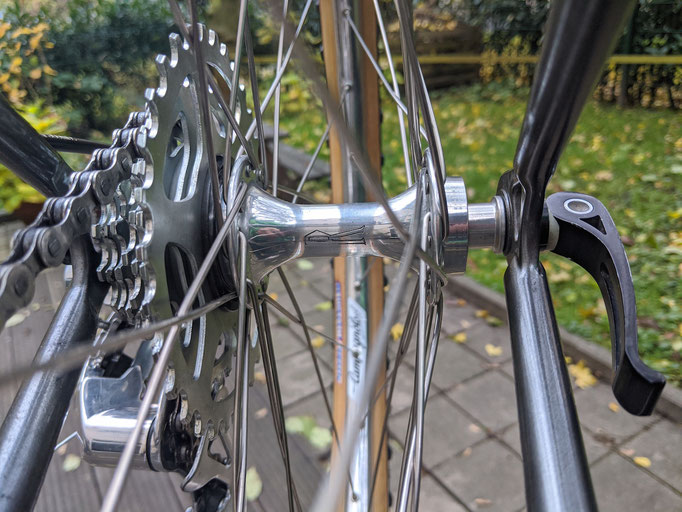 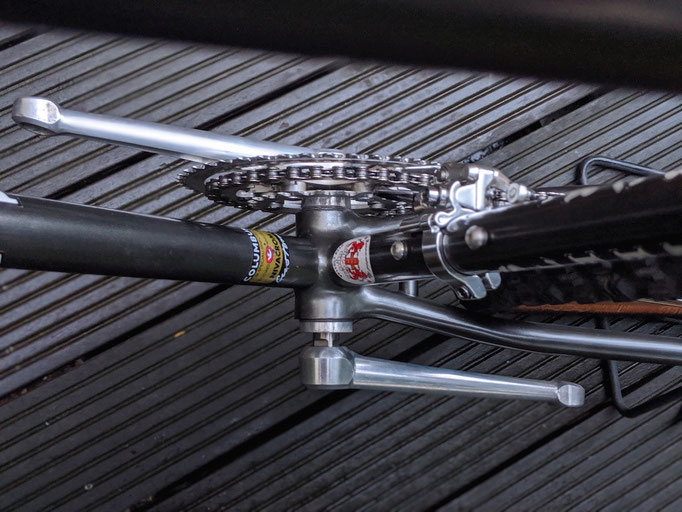 The Edco parts and Jackson decal opened the idea to play a bit with red, while the decale from the Robers letters had this white/black, which I replied with the silver/black parts.

One of my all time favorite are the Ritchey Megabite 2.1 - simply perfect rider and give every bike the "lets go on a trail" look.

The stem is a repro of the famous Ritche Force fillet brazed stem. A Ritchey fan in Thailand started making these with very high quality, I liked it (and needed a noodle, hence the fork steerer was too short). Real True grips round this picture up imho. 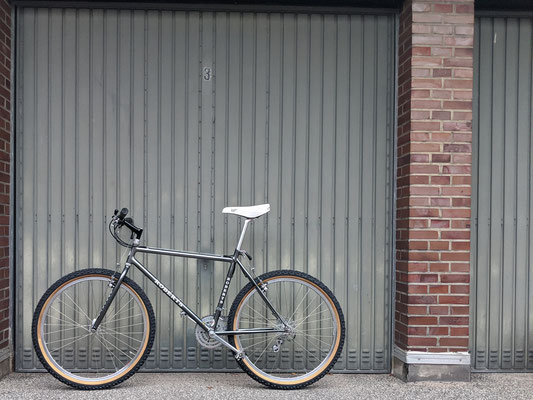 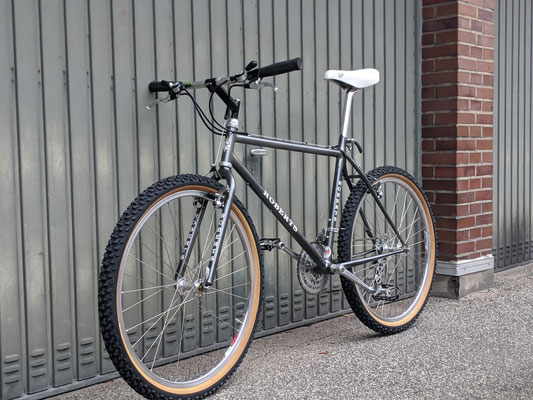