This project turns from a - ok, my last Yeti was pretty, but too small AND, I didn`t build it to a fascinating complete restauration.

I´m honest, I do have a preference to build them, which is also why I started this website to report on the history.

I found the Yeti when I was surfing my standard German Craiglist local searches. And BAAM, there was a 20" Yeti. It looked nice and best situation, I knew the owner well. I contacted him and we found we do have similar interests, a nice conversation started. Thanks Gunther.

As always, I ran down my questions. Is it original paint, were does it come from, do you know anything from the previous owner. But all I got was - bought it, was repainted, no serial number.

But I knew already to look for the drop outs, the seat clamp & co - which I missed with my first and never was able to reconstruct history and origin. But this one looked good, there was all on it what I learned - top tube round, Simplex drop puts, seat stay, the clamp, nice...

After the arrival, I digged a bit deeper in the Yeti World. Martin´s Secondspin page was indeed the perfect source for this LINK.

What I also found here was to watch for the portage straps. I also wanted to know the year, since a couple of my friends told me this a big frame is likely an early Yeti. To proof this, I did it, I scratched color away from the BB and found the 380. But no XR?

After that, my first assumption, It is an early YETI YAK.

I loved the idea and started searching the parts - White Bullseye crank and hubs. I even found a FTW - Frank the welder stem and NOS White Porcs. Most came from this nice dude, Jason, but also a big thank you Kevin for the crank and the massively kind Yogi from the German forum.

For a while, I was so happy to build this, I forgot to finalise my research of the frame.
But Martin told me perfectly right, it has no rack mounts. also the YETI catalogue I found later proof that.

The plan to build the Worley race bike was born after this moment of frustration. At the end, Martin´s page drove me to that. The article on the early Yeti´s is a great piece of history documentation with nice pics  - this was and is very motivating, even though the parts seem to be impossible to find - Cook Bros Crank and hubs as well as Carbon Sushi bar:(

In the meantime, I send the frame to Cycle Art Berlin (see details here). The found of the Worley plan lead to a change of the white to turquoise. Gerrit came up with this genius idea to clear coat the serial after I requested to only put thin color on it to see the serial. After paint

A fraction of the shining color

Here some impressions from the painting. Very nice to see again the details - the Simplex drop outs, the the different cable routing FTW stem, the round top tube, even some fillet brazing.

One little piece is missing - the Campagnolo drop outs from the fork, but I think I can live with that.

Looking at the part list, obviously the Cook Bros Racing parts worried me the most - Crank, BB, carbon sushi bar AND hubs. But after 6 month of search, I found these beauties. Very interesting is the hub, which was NOS, but is painted.

Quite rare these 20" YETI frames, the steerer feels extraordinary long.

The preserved serial is one of the highlights. One can also see the mount for the cable routing which turned later into a challenge. Still great idea:  All credits to Berlin Cycle Art.

The round top Tube

Hence I wanted to build a replica of the 1987 Russel Worley race YETI, I had to reproduce the Cook Bros. Racing decals. As a personal hand writing, I decided for the old YETI decal and put a white color touch in, by using one word in white letters. This and the FTW - Frank the welder - stem in YETI turquoise should be the only custom element

Again, it is amazing how well one could polish these old parts to find back a minty appearance. see here, 3/4 are done already

The Cook Bros. Racing and XT 730 parts will be topped with two more highlights - The magura cantilever brake levers AND the one and only BMX headset (the magazine did not name it, but I wanted it): THE GT Epoch 1" headset. The saddle is also one of my Classic MTB favorites: Super Turbo

I usually start with the bearings, so first the head set and BB. The first pics shows one of my favorites of the complete restauration.

These 2mm Sapim spokes do a good job

The cable routing and Ferrules

Interestingly, these days they still sell the SLR cables in yellow, so this was not a problem. The ferrules cam from Jason over in US, even polished - thanks man :). I decided to use the brake cables for gearing, hence Russ had only yellow gearing cables. Why brakes for gears: because otherwise, the Ferrules would have been by far too big. Later I found I had to organise another set of Ferrules, which fits into this little thing (and the stem). The second pictured showed the routing tool for the FD, hence these old YETI frames did not have a roller yet. pretty hard to get the original, yet

To protect the frame and decals without clear coat, I decided for extra cable routing liners. The fly really felt attracted by the yellow SLRs. Brake cables were thick XT730 for the rear and a thinner for the front because Frank did a smaller routing hole in his new version...

Teh routing Plan and result

The assembling of of the cockpit was exiting. To be honest, I´m really a bit worried about these old carbon fiber bars. Look how thin they are - needed inner rubber spacer for the grips. And next to it, these massive brakes - made in West Germany. What a great MTB period and so great we don´t have West Germany anymore.

Let's take her out and RACE! 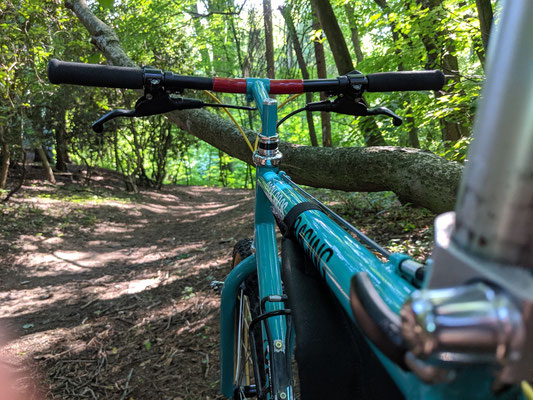 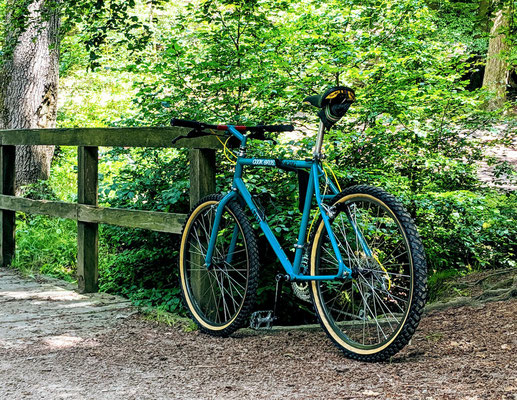 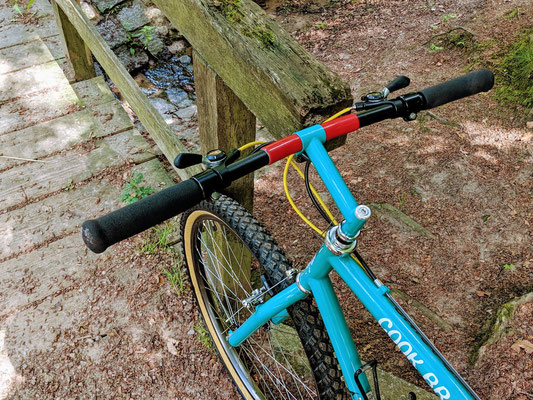 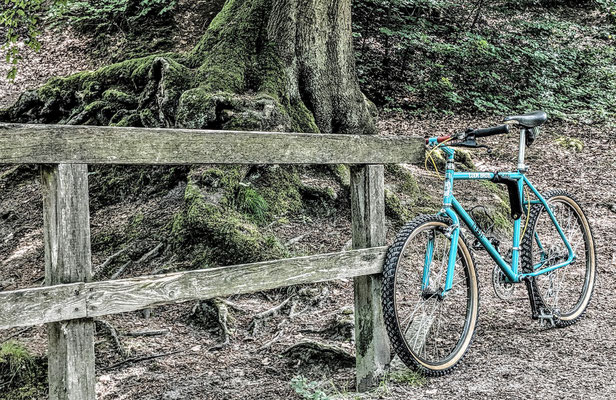 The build - All details 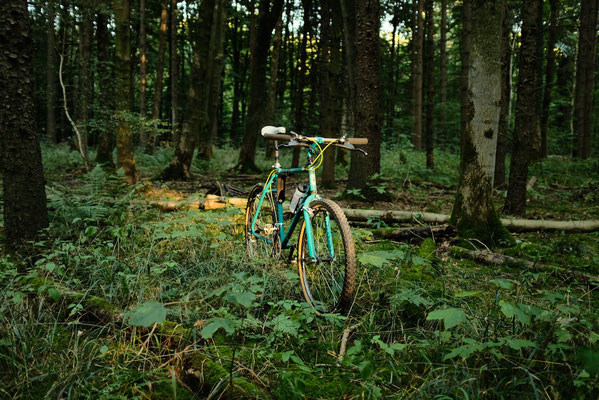 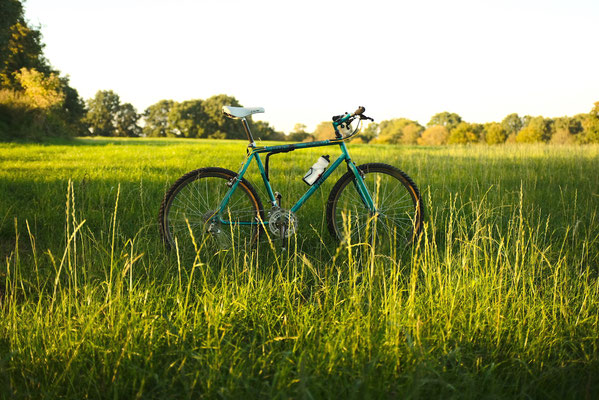 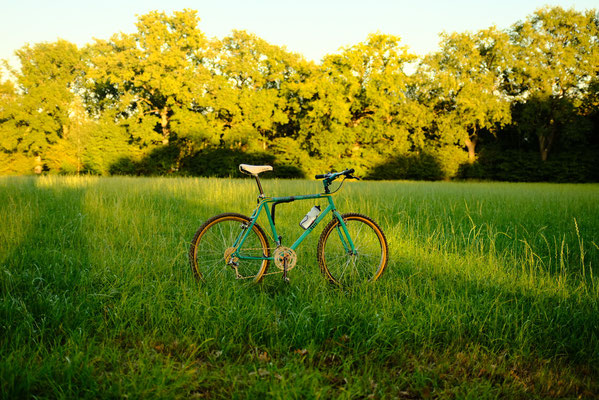 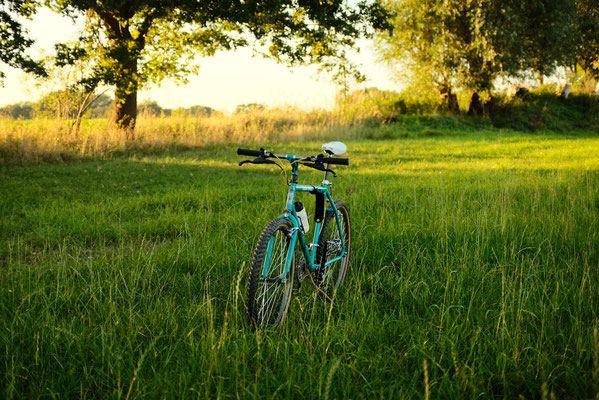 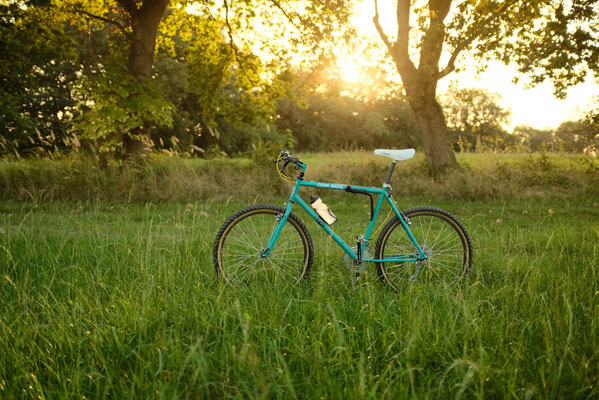 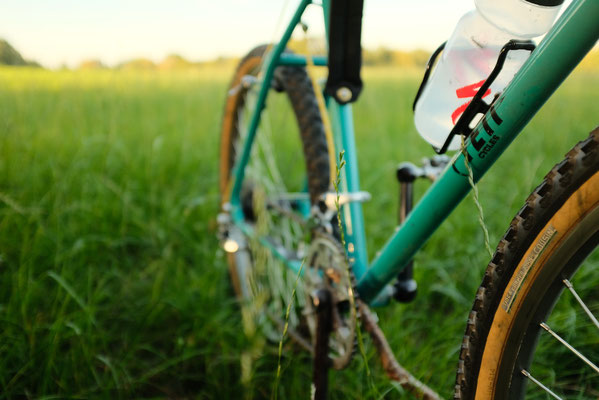 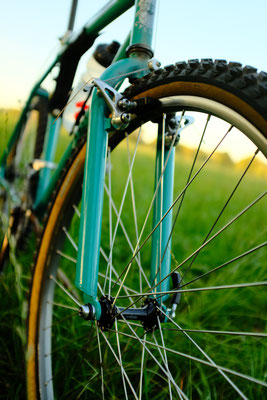 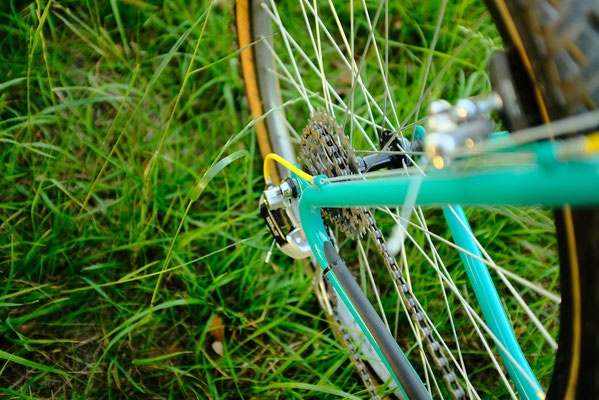 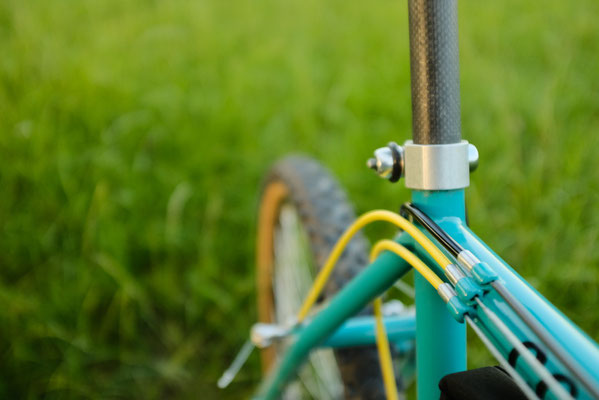